How to travel with a Ferret 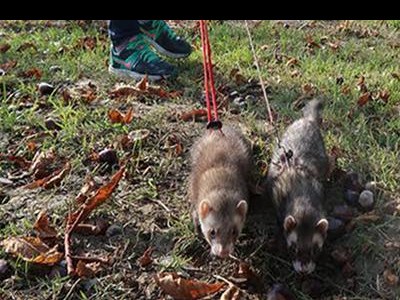 Every pet is a part of the family, including ferrets. When you are traveling or moving to another city, your pet will come with you. Ferrets are still unconventional pets and traveling with a ferret can look like a challenge, but is it really? What do you think?

Is Ferret a good travel companion ?

Ferrets are very energetic animals when they are awake, but that doesn't mean they can't be good travel companions. Actually, ferrets are awesome during travel because ferrets usually sleep for about 18 to 20 hours a day, which means they will spend most of the trip sleeping. When ferret falls asleep there isn't much that can wake it up. They can sometimes sleep so hard it looks like they are dead. That is called a ferret dead sleep, some ferrets have it more than others.For traveling or moving with a ferret you need a transporter with hammock, a puppy pad and a food and water bowl. You don't have to fill them, you can do that when the time comes.

There is one thing you must know before traveling with your pet ferret. Ferrets can't sweat and if you are traveling in hot summer days, make sure your ferret is not in the too hot environment. If a ferret is too long in the heat it can have a heat stroke which can be fatal for them. If your ferret starts to drool, pant or gasp he is extremely hot and you must cool it off. Always bring a bottle of water with you and, if it is possible, freeze one water bottle so you can use it as ice package Water bottle is a good choice because a ferret can't chew through it.

International Travel with a Ferret

If you are planning to visit another country with your ferret check its laws first because ferrets aren't legal in every country. Also, there are documents you have to have when you are crossing the border with any pet (including ferrets), like a certificate for vaccination. If you are planning to make a trip across the USA, you can't visit California, Hawaii, District of  Columbia or New York City because ferrets are illegal there. In California, you can't buy, sell or have a ferret as a pet and in Hawaii, you can't have a ferret as a pet either. If they find a ferret with you, you will have to pay a big fine. But if you surrender your ferret to the authorities, you won't have to pay any fine (or significantly low).  Reasons to ban ferrets are mostly wrong or few hundred years old. The law says that ferrets are wild animals and are dangerous to animals native to that area. Ferrets are domesticated over 2,500 years ago, meaning they really aren't that wild and due to that domestication, they can't survive on their own in the wild. The best proof for that is their inability to sweat and the fact that they are prone to fatal heat strokes during hot weather.

In Australia and New Zealand, there are countries which banned ferrets as well, all with the same reasons – dangerous to native animals. New Zealand is actually the only place in the world where ferrets made feral colonies around the year 1800 because there weren't any predators which will hunt them and the climate of New Zealand suits them perfectly. People imported ferrets to New Zealand because rabbits were out of control and ferrets hunt rabbits. The only problem is that ferrets hunted native birds more than rabbits. Today, ferrets aren't illegal in New Zealand, but you can't buy or breed ferrets. If you have a ferret, that ferret is legal, but you can't get another one. Queensland and Northern Territory share their fear of feral ferrets so they banned ferrets even though they don't have any reason to worry about that. The climate is hotter in Australia and they have predators like dingos, so ferrets can't really make feral colonies there.

You can always travel with a professional company who transports animals if you aren't sure what your next step is. Most of those companies know which documents are important in which country so they will help you with everything, from documentation to transportation of your ferret. For international travel my opinion is to hire a pet transportation company like K International Freight and I know I will travel with them on transcontinental trips.

So, pack your ferret, research about the law of the country you are traveling and go on a trip! Safe travel!

Anja is a ferret lover who has two ferrets Frida and Yoda. She has a website called Friendly Ferret where you can find everything you need about ferrets, useful tips and tricks about health, care or training and products made for ferret owners and specially made for ferrets.

K International Freight Ltd specialises in Pet Moving Worldwide and is based in Dublin, Ireland.

Please visit us at the following link for details of our services. http://www.kinternationalfreight.ie/